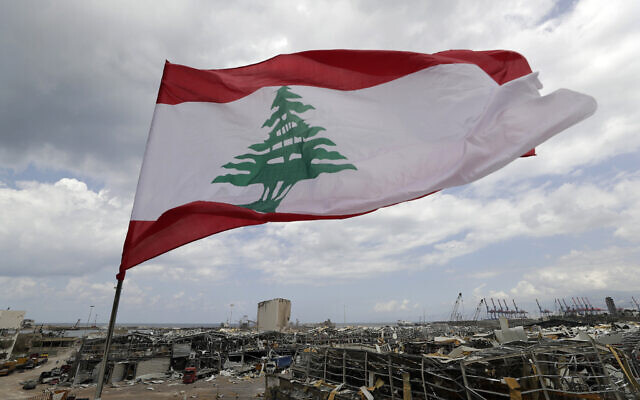 A Lebanese flag set by citizens flies in front the site of an explosion that hit the seaport of Beirut, Lebanon, August 9, 2020. (AP Photo/Hassan Ammar)

My name is David El-Khouri and you may know me as the director of Missions and Learning at Veritas Short North. What you may or may not know about me is that I am Lebanese. If you have ever wondered about my last name, it is a Christian/Arabic/predominantly Lebanese name meaning “The Priest”. My father moved to this country from Lebanon when he was in his 20’s. I have dual citizenship with Lebanon and I have visited a few times. I have a genuine love for Lebanon, its people, its culture, its food and its location. I hope and pray that there will be an economic and political transformation in Lebanon but more than that I hope and pray that the people of Lebanon would be transformed by the Gospel of Jesus Christ.

The situation in Lebanon for much of 2020 has been incredibly difficult. To give you a little history politically, Lebanon is a melting pot of religions, namely Christian (Orthodox/Catholic/Maronite including a very small percentage of evangelical Christian) and Muslim (a mix of both Sunni and Shiite). By law the President of Lebanon has to be Christian, the Prime Minister has to be a Sunni Muslim, and the Speaker of the house Shiite Muslim. On top of all that there is the growing influence of the political/terrorist group Hezbollah. The government has long been viewed as ineffective at working together, inept at getting anything accomplished, and corrupt with a history of bribery and payoffs. As a result the people of Lebanon have largely been forgotten and neglected. By the end of 2019, the people had had enough and there were weeks of demonstrations and protests that took place from the end of 2019 to early 2020. In January of 2020 a new Prime Minister and Cabinet were appointed but the people are still not happy and the corruption continues. While I am writing this letter, the new Prime Minister and his Cabinet have just resigned. In the midst of all the political unrest, Covid-19 basically shuts down the world. Lebanon was no exception. The people are suffering economically and they are now in the midst of a famine. The value of the Lebanese pound has plummeted and as an example, a salary of $1500/month is now only worth ~$150. Prices have skyrocketed due to scarcity and people are losing jobs and homes. If all that wasn’t enough there have been a few different shootings in villages as well as the regular altercations between Hezbollah and Israel at the southern border.

Then on Monday the 4th of August, just a little over a week ago, it all got much worse. A fire broke out at the port of Lebanon which ignited 2750 metric tons of Sodium Nitrate, a fertilizer that is used as an explosive. This Sodium Nitrate was confiscated off a Russian ship that was abandoned in the port. It was put into storage in a warehouse and left there for the past six years . The explosion was so large that it decimated the port and the few city blocks surrounding it. There are reports of windows being blown out upwards of 10 miles away. The explosion was felt on the Island of Cyprus 160 miles away. By comparison, the 1995 Oklahoma City bombing was only 2 metric tons of Sodium Nitrate. The results of the explosion at the port of Lebanon were catastrophic with around 160 people dead, thousands injured, hospitals overwhelmed, and thousands of families now homeless. The results of the explosion are also going to be far reaching as the primary port in Lebanon, a country dependent on imports, has been destroyed. The call of the people of Lebanon for help is clear but it is being met with conditional acceptance. Many countries in the world are willing to help IF the Lebanese government is forthright about their dealings with Iran, Hezbollah, and other terrorist cells. Therefore the people wait and they suffer.

I am writing you all of this for a few reasons: to let you know a little bit more about the tragic state of Lebanon, to remind you that Veritas has heart for Gospel Mission which is a desire to see the world know Jesus and to see God’s restoring work renew what sin has destroyed. to be redeemed and restored. I am also writing to offer some ways you can help.

You can pray for the people and government of Lebanon – the political and economic crisis and most of all that the Gospel would boldly be proclaimed.

I want to be clear about giving, if you do give it would not go to the Lebanese Government as they do not have a history of actually helping the people. I also want to encourage you that if you do give, it would be to an organization that would be gospel centered and people oriented.

Heart for Lebanon – two summers ago a small team from Veritas visited and worked with Heart for Lebanon. HFL is an organization working primarily with refugees in Lebanon meeting basic human needs such as food and healthcare alongside of sharing the Gospel.

Check out this article Marwan wrote for the Gospel Coalition called “Despair and Light from the rubble of Beirut.”

Veritas is currently going through a sermon series on Hebrews.